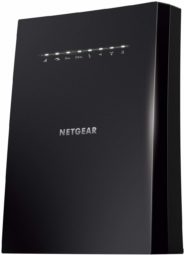 The NETGEAR WiFi Mesh Range Extender EX8000 lets you quickly build your own robust extended WiFi network. With it, you can enjoy all the advanced router features that this Nighthawk has to offer while giving you the flexibility to customize networks in 2.4 and 5GHz. Use your existing router’s SSID to create a single network or use multiple SSIDs to create separate networks.

It also delivers an improved WiFi performance, as it combines speeds up to 3Gbps along with a dedicated WiFi Link to the router to avoid cutting the extended WiFi bandwidth in half. And with smart roaming, you can connect your mobile devices to the best available WiFi — it uses your existing WiFi name for extended WiFi coverage. With Smart Connect, you can intelligently select the optimal WiFi band for every device, while giving you a seamless WiFi connection.

The NETGEAR WiFi Mesh Range Extender EX8000 adds WiFi coverage of up to 2500 square feet and connects up to 50 devices, including smartphones, laptops, IP cameras, tablets, speakers, loT devices and more. It also provides seamless Smart Roaming using your existing network SSID name, so you never get disconnected, whether you stay in the office or move around the home.

This range extender provides speeds up to 3000Mbps using its tri-band and patented FastLane3 technology for all your heavy-duty needs — from multiplayer gaming to 4K HD streaming. The NETGEAR WiFi Mesh Range Extender EX8000 also works with any wireless router, gateway, or cable modem with WiFi.

The NETGEAR WiFi Mesh Range Extender EX8000 comes with wired ethernet ports. With it, you can plug in game consoles, streaming players, or other wired devices into the 4 Gigabit ports for maximum speed. It also supports WEP and WPA/WPA2 wireless security controls, so you know you’re always safe and secure.

Unfortunately, the NETGEAR WiFi Mesh Range Extender EX8000 doesn’t do any better than its cousins in the range extender market. One customer complained that while he was streaming on the 5gHz band, it would randomly shut down. And calling the customer service line doesn’t work either since their staff are outsourced in a different country and it was quite hard to understand them. And when trying to ask for further help, the customer was being charged for “technical support,” even when the product was still under warranty.

Another problem that this product suffers from is how it has made false claims of increasing the speed of your WiFi. However, this is not what happened for one customer who was extremely disappointed to find out that her WiFi signal was in fact getting slower and not faster. And while the NETGEAR WiFi Mesh Range Extender EX8000 tries to give us fancy promises such as “faster WiFi speeds” and “improve your WiFi speeds up to 100% faster,” they don’t deliver on any of those claims.

The NETGEAR WiFi Mesh Range Extender EX8000 gives us a lot of promise and potential, only for it to be dismissed once the product has reached our homes and used for its intended purposes. We wanted this product to be an excellent addition to any home, but unfortunately, it just doesn’t deliver our expectations. Not only does it get our hopes up, but it destroys all our dreams of getting a proper WiFi connection.

All in all, the NETGEAR WiFi Mesh Range Extender EX8000 is a big flop, much like all their other range extenders, which is sad because we hoped that at least one of their products would give us what we want. And to ask for $200 is more than we can afford for a range extender that doesn’t work as it is supposed to. So to save yourself from awful customer service, getting ripped off, and having to face a lot of troubleshooting on the phone, it’s best not to consider this product.