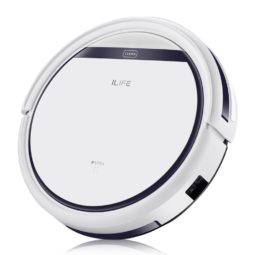 The iLife 804 A8 might just be the answer to your home cleaning problems. Using panoramic navigation, it deeply cleans floors in no time. And with its improved design and functions, you never have to worry about dirty floors again.

This robot vacuum is also smart enough to scan around its surroundings not just for furniture but for smaller items such as toys, to ensure no collisions. With so many technological advances in the iLife 804 A8, your hands might just stay off the floor forever.

Cutting Edge Technology: The ILIFE A8 robot vacuum combines advanced technology with sophisticated design, allowing it to methodically clean surfaces. Its Gen 3 cyclone power cleaning system efficiently takes dirt off from all floor types, taking the work out of house work. With its vast array of sensors and its thin, yet powerful 2.8″ body, there has never been a better robot vacuum to clean your home.

Powerful Sensory: Using its Panoview navigation, the ILIFE A8 scans its surroundings with a live-visions panoramic camera to systematically find its way while cleaning your home. It automatically maps out your home to create its cleaning plan based on its surroundings. Because of its advanced mapping features, the A8 never cleans the same area twice, nor does it leave anything unturned.

Smart Features: The A8 is one of the few robot vacuums to have it’s own i-voice technology, which lets the user know what it’s currently doing or if it needs attention. It also cleans smarter, as opposed to harder, by continuously scanning around the room, the A8 won’t bump into any obstacles as it cleans.

Built-in Versatility: Utilizing extra-large roadrover wheels, the ILIFE A8 stays stable moving throughout various surfaces. Its versatile brushes also work alternately, with the bristle brush picking up dirt, while the rubber brush prevents debris from sticking on hard floors. And once the robot hits low battery, it uses its auto-charge and resume feature, to help it remember its last position as it charges. When it’s ready, it resumes cleaning using its built-in gyroscope to come back to the coordinates.

Despite its many unique features, the A8 manages to overlook some important things that would’ve helped them to build the perfect robot vacuum. Issues such as weak battery life, faulty time scheduling, and getting stuck under furniture add up to be big disappointments.

Other problems include broken charging systems, the whole product itself not working up to standards, and breaking only a few months in. With such disasters leading to growing complaints, there might not be enough time for iLife to redeem themselves.

Did the iLife 804 A8 try to do too much? Perhaps it did, or maybe it just focused on the wrong things? Whatever the reason, there is no denying that after the initial delight in its fancy technology, the bitter truth is that it just doesn’t hold up compared to other robot vacuums. Maybe in their next iteration, they should put time and effort into making a simple but working model, rather than a technologically advanced unit that breaks within a few uses.

And while it seems quite handy at first, the sheer volume in which these incidents occur is enough to throw off even avid fans of iLife’s work through the years. However, its lower price tag might just be enough to sway potential buyers to give it a chance.