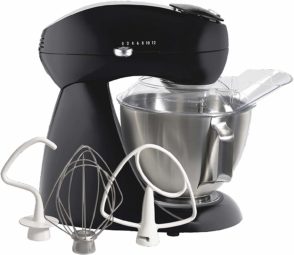 The Hamilton Beach Electrics 63227 employs planetary mixing action which rotates the beaters around for an even and complete bowl coverage. It also provides 12-speed settings, so you can go from a slow stir to a fast whip, making it excellent for mixing anything between light whipped cream to sticky bread dough.

This electric stand mixer delivers a powerful performance with a 400-watt motor and is packed in a built-to-last metal finish. Its 4.5-quart stainless steel bowl with handle is large enough to mix dough for huge batches of birthday cake batter or mashed potatoes for a full house. Also included are attachments to make your life easier such as a flat beater, whisk and more.

The Hamilton Beach Electrics 63227 Tilt-Head Stand Mixer lets you masterfully knead, mix, whip and create your favorite baked goods and homemade recipes from scratch. Its planetary mixing action and its 12-speed setting give you unparalleled control for mixing a delicate meringue to sticky bread dough.

Built with a powerful 400-watt motor, the Hamilton Beach Electrics 63227 Tilt-Head Stand Mixer gives you constant power for consistent mixing — even while you add ingredients. Also, the durable die-cast metal finish and its classic design will stand the test of time. Finally, its tilt-up head has a quick-release feature that allows you to add ingredients with ease, while the locking bowl locks into the base for hands-free mixing.

With mixing accessories included (which are all dishwasher safe) such as the flat beater, dough hook, whisk and splatter shield, you can get more done with the Hamilton Beach Electrics 63227 Tilt-Head Stand Mixer. It also comes in four gorgeous colors to choose from Licorice, Sterling, Sugar, and Carmine Red.

While using the Hamilton Beach Electrics 63227 Tilt-Head Stand Mixer can result in great food, it faces problems that prevent it from standing out in the crowd. Issues with its performance can be seen when trying to use the mixer, but instead of the grinder spinning, it produces a loud grinding noise and nothing happens. Even if this isn’t the most expensive mixer, it is still a huge disappointment when you buy something brand new but doesn’t work as intended.

Another inconvenience that users may experience with this product is how it started to smoke after only 5 minutes of use until it finally died 10 minutes later. And even after giving it the benefit of the doubt and sending it back for a replacement unit, the same thing happened after only 30 minutes. I find that this is a massive loss on the part of the company, as such defective products completely taint their reputation.

In the end, the Hamilton Beach Electrics 63227 Tilt-Head Stand Mixer fails to impress, especially with the $161 price tag attached to it. Even with its excellent features, it can’t redeem itself with the lackluster performance it gives and puts users at a 50/50 whether you get a functioning unit or if you get a defective model that will fail to deliver within its first hour of use.

Because Hamilton is a huge brand, people’s perceptions and expectations from them are very high; to deliver a subpar product is not only disappointing to see but also discourages many people — new to the brand and avid fans alike — from ever wanting to discover their products. Unfortunately, the Hamilton Beach Electrics 63227 Tilt-Head Stand Mixer doesn’t reach its full potential and can’t be recommended.