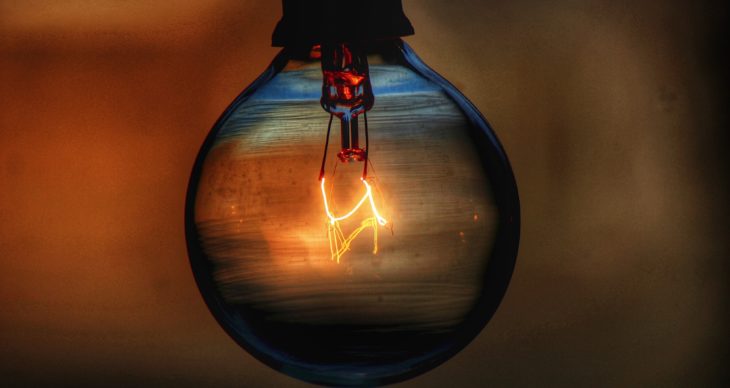 Today, you’re in luck – we’ve gathered 50 of the best scientific blogs on the internet out of millions. Buckle up, you’re about to see directly from the eyes of prominent scientists through their blogs.

One of the best sources of science news for readers who want to be updated frequently, they update their posts 28 times in a week.

New Scientist Magazine is currently the world’s #1 science and tech magazine. Its online website keeps you updated on what’s new, it keeps you alert on the latest hubbub.

It contains exclusive information and breakthrough updates all across the globe. They have a whopping 42 posts every week to satisfy anticipating readers.

They’re known as the longest constantly published magazine in the United States. Scientific American Magazine has been sharing exclusive insights to its readers in both science and technology for more than a century – to be exact, over 170 years. Educating the readers on the most motivating advances in the field.

It gives you quality content on science daily news, informative blogs, and feature stories. Science News Magazine focuses on all science disciplines. Their website also shows the archives from 1924, which is an interesting read.

Discover Magazine picks out the most entertaining blog posts, and mind-blowing science content that piques the interest of readers, fueling creativity and imagination.

It has garnered over 5 million readers over the years in the industry, content is directed to the general public. Topics range from black holes to robots.

Wired focuses on giving relevant blog posts. It shows off interesting news on science, content topics no one would ever think of covering, making their posts original and intuitive.

Their content is always delivered in a clear, insightful voice. Discover the latest news on technology and how it’s affecting the scientific world.

POPSCI has been feeding us informative news on science and technology since the year 1872, and it still continues to pump out quality content to this day. It gives you in-depth gadget news, detailed commentary, and scientific discovery news.

SPACE is directed for readers who are captivated with space science news. They’re an updated source for technology and astronomy news as well.

Covering from cool satellites to brilliant stars, they give you exclusive NASA info.  Readers are kept entertained and informed as they update the site 56 times a week.

Sciencemag is regarded for its contribution to the journal of original scientific research as well as global news. It feeds you the content of value on science, and it covers a wide range of the subject, such as biology, medicine, environmental changes, and even astronomy.

You’ll get the latest insights from New York Times about space development, environmental updates, genetics, and its effects, brain processes, and archeology on their weekly updates.

Starts With A Bang!

Starts With A Bang! is a blog on Medium that generally talks about earth science and other relevant topics on the subject. They keep the blog regularly posted with 6 new posts every week.

The Guardian mainly talks about controversies on scientific research. Posts are contributed by reporters and guests. It’s the best place to explore other people’s perspective on science. The website openly shares the opinion and analysis of enthusiasts from all across the globe. 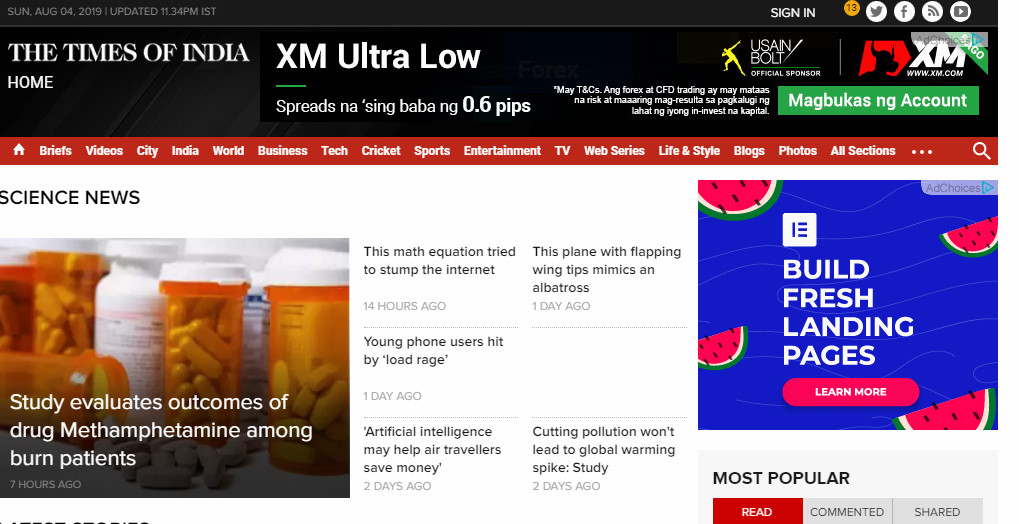 Motherboard is your go-to source for the subjects on connection between technology, science, and humans. The online magazine showcases the latest news, commentary uploads, and details reports. They’re known for their produced video documentaries.

Forbes Science discusses innovative technology advancements, and the top headlines on science. It’s regarded as one of the most reliable sources of news when it comes to innovation and science. They continually feed readers valuable information with new updates, 56 posts a week.

ABC Science provides comprehensive articles on the latest science news. Showcasing analysis and opinions of well-known figures in the industry, it piques the interest of the curious minds. Scan through their photo galleries, video productions, and podcasts for more informative content.

National Geographic News is known for its high-quality production, delivering people exclusive content. It’s the world’s original source of nature and science information. Their team travels all around the globe, sharing their stories and discoveries to enthusiasts.

Written by specialized experts on the area of climate, oceanography, biology, healthy, and other relevant subjects. State of the Planet delivers content of how our planet works, and how we can use sustainable development to our advantage.

UWMadScience talks about interesting matters on science, health, biology, and vortexes. Content written is fun, entertaining, and most importantly, informative content that keeps any science aficionado’s eyes glued to the screen.

Live Science gives you detailed events on the developments of science, tech, health, and space. These groundbreaking events cover from the environment to culture and history.

They keep their mission straightforward and simple: Make readers 5 minutes smarter than their first arrival on Live Science’s homepage.

PLOS educates readers on diverse standpoints on both science and medicine. It gives you a fresh perspective on existing matters, allowing you to understand better from different outlooks.

The organization focuses on progress acceleration in science and medicine, their means of pursing their advocacy is through comprehensive revolution in research communication.

Science Daily started their mission in 1995, and since then, they’ve become one of the world’s best place for scientific discoveries. Topics range from zoology to astronomy, their source is from top universities worldwide and exclusive organizations.

Bio Trivita is managed by a Biochemistry student, P. Venkateswara, who wants to express his passion for enthusiasts all around the globe. It’s an open community where anyone can start sharing their own opinions, analysis, and scientific perspectives.

Phys.org tackles on different aspects of science, such as chemistry, biochemistry, and other relevant topics on the subject. Learn about polymers and material science, written in fun, pieces for fast reader comprehension. It delivers a full sweep of info on science, technology, and medicine.

It gives the readers an in-depth look at the realm of Smithsonian, get a detailed look at exclusive researched subjects by their institution. Read groundbreaking science developments in science, and its importance of everyday life. 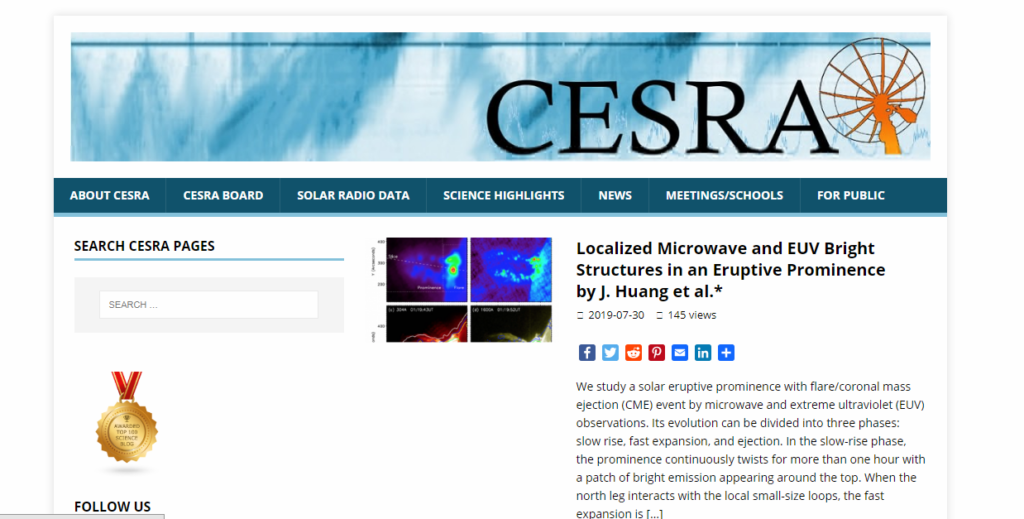 Community of European Solar Radio Astronomers (CESRA) is handled by qualified scientists, sharing their discoveries of the Sun. It uses radio waves to study about the hiliosphere, giving enthusiasts an opportunity to get exclusive information.

Provides content on space, it gives you input direct from the universe’s edge of gravity. It’s considered as Europe’s doorway to space. Read informative posts on earth science.

EurekAlert! Science News tackles on science news, giving you daily updates on health and wellness, medication, and of course, science and technology. Received sources are from top administrations and universities. It’s supported by AAS, the well-known science society. 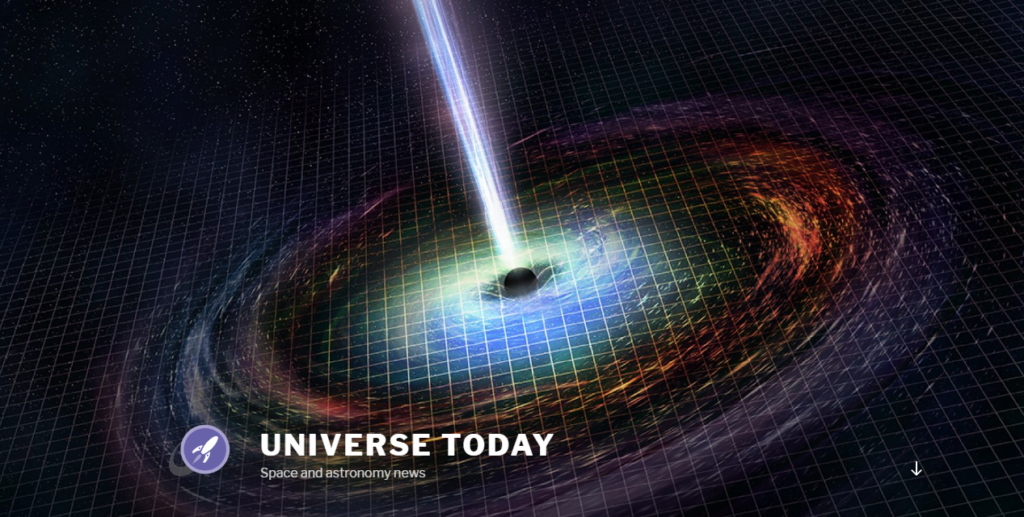 Universe today delivers regular news on everything Space and astronomy related. They feature well-written content that feeds the mind while keeping you entertained. Aspiring astronomers are fed detailed input from Universe Today’s experts. 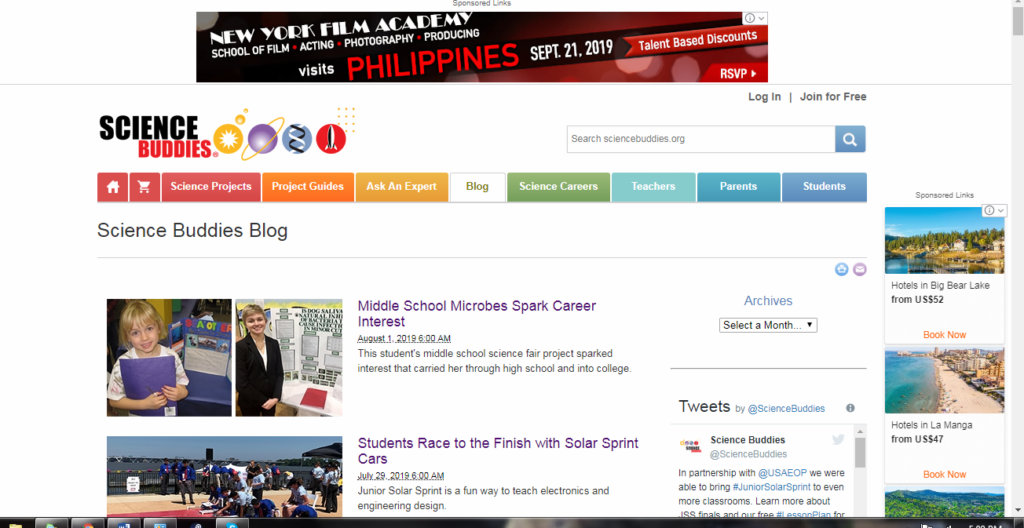 Science Buddies Blog is geared for students who are into the fields of science, technology, engineering, and mathematics. It showcases awesome, science fair ideas for both students and teachers.

Students enrolled in STEM can find thought-provoking projects and activities. It’s one of the best sources for K-12 science education. 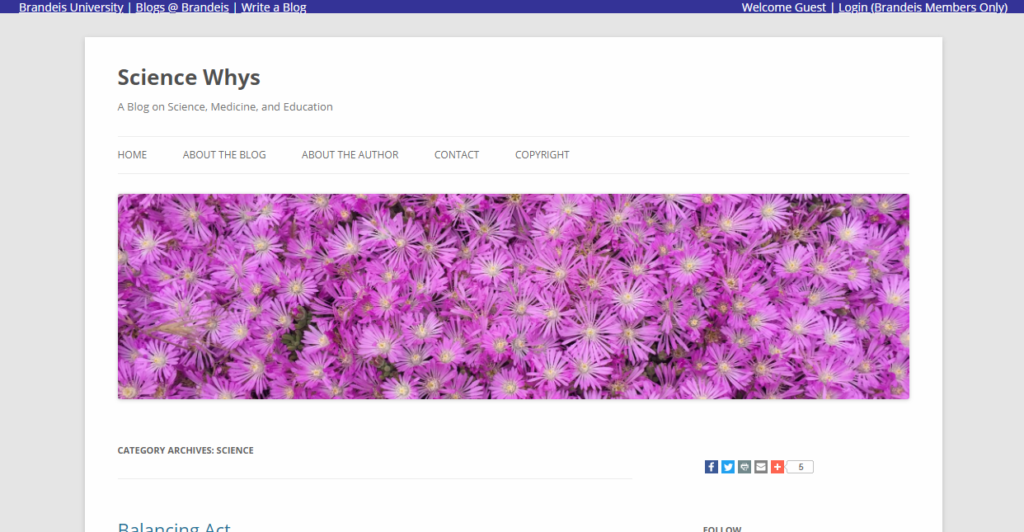 Science Whys is administered by James Morris who is a current professor of Biology, teaching at Brandeis University. He talks about his analysis and perspective on science, medicine, and education for students and readers alike.

Watts Up With That 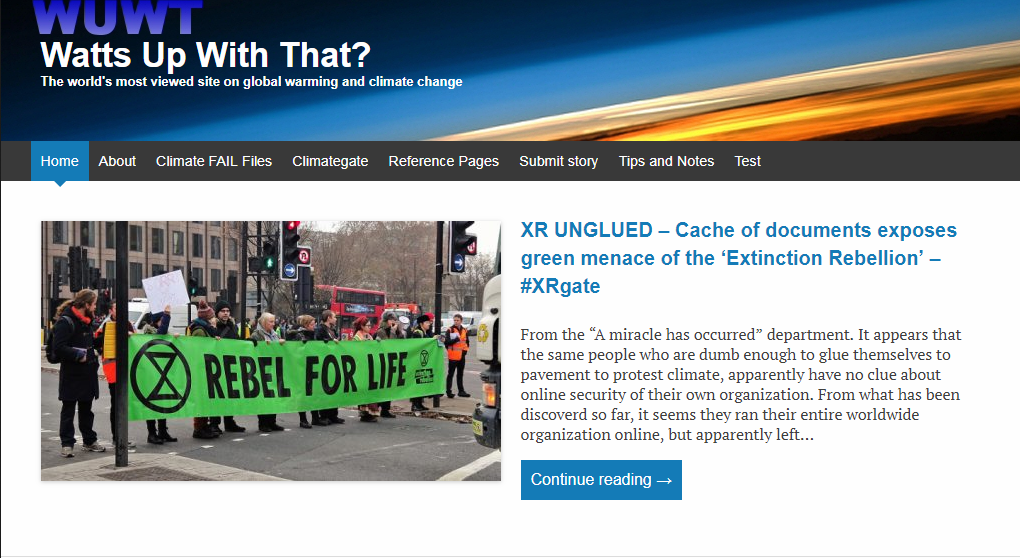 Watts Up With That started in 2006, run by Anthony Watts. He’s a former AMS specialized meteorologist who has practice his profession for 25 years.

He continues to share his discovered, opinions, and analysis on the internet via blogs, radio, and other media outlets. Mainly discussing science, weather, and technology. 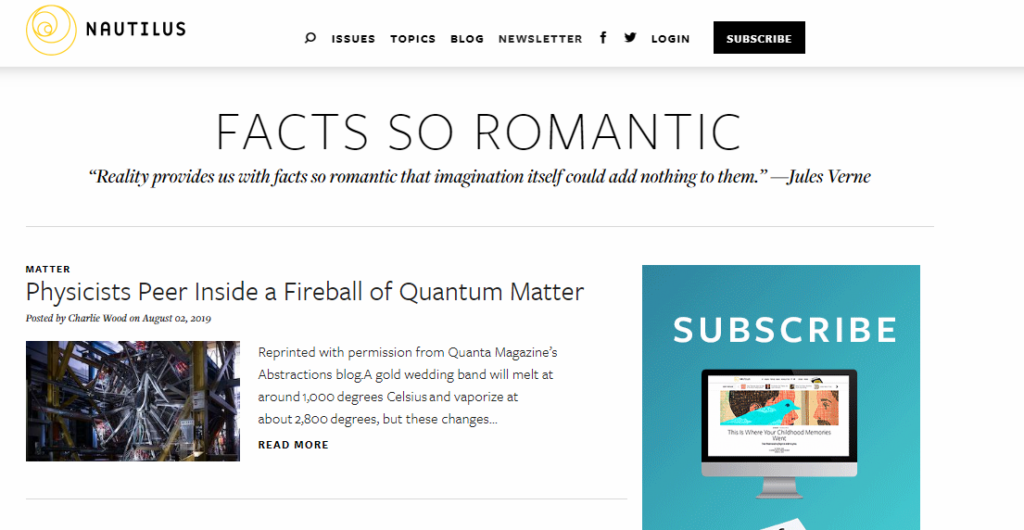 Nautilus sets itself apart from any other science magazine as they focus on sharing the big-picture of science. They only give one monthly topic coming from multiple angles of perspectives.

AGU Blogosphere is a global scientific community, it promotes the discovery of Earth and Space Science. Explaining how it positively affects humanity. This is a non-profit organization, administered by professional scientists. It has garnered over 60,000 members all around the globe. 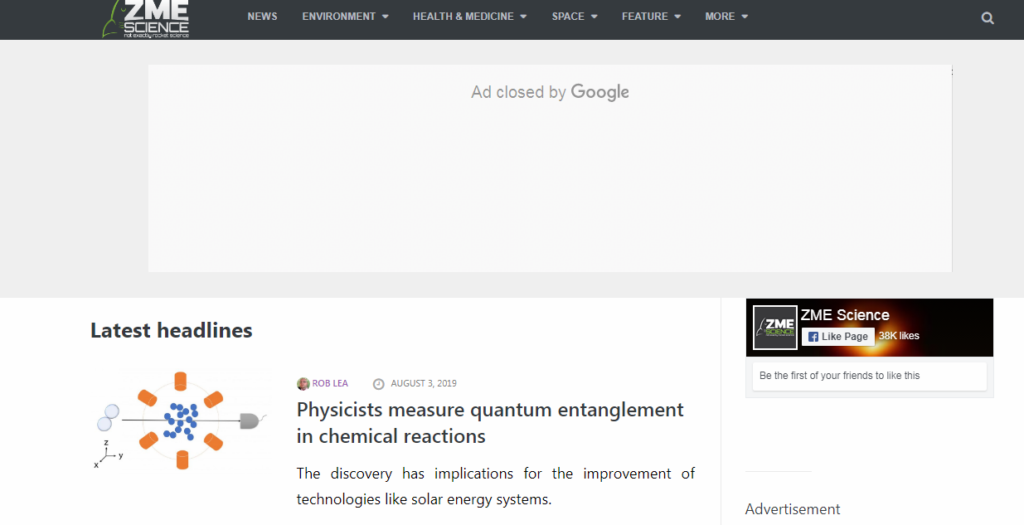 ZME Science gives you updated news on health developments, environmental sciences, technological advancements, and space. It digs out the interesting news that’s relevant to science and the environment.

Cool Green Science is regarded as the top leading conservation institute. They work all across the globe with the mission to protect environmentally important areas for the benefit of nature and people. It talks about environmental science, health, and other related aspects.

This is an award-winning website, known for its quality online publication. They’re focused on delivering age-appropriate news for students, learners, teachers, and parents. Their programs are for enthusiasts and the general public.

os Magazine | The Science of Everything

Cosmos Magazine has made a reputation for itself over the years, making it one of the most popular science magazines to date. They focus on cultures, such as back issues, and other areas of social science.

Futurity keeps you updated on the latest science hubbub. Discoveries are from top scientists and research universities in the United States, Canada, United Kingdom, and Australia. It lets you discover the future with its meticulously written content.

Real Clear Science is a gateway to relevant science news, coming from the opinion of experts, enthusiasts, and professionals all across the globe.

It covers everything from small topics to the exclusive findings of scientists. This gives you a community where you can express your own scientific analysis on different subjects.

Its creation was to bring families together through educational podcasts, videos, and entertaining blogs. It’s hosted by Lindsay Patterson, a science journalist and her partner, Marshall Escamilla.

Earth and Space Science News consistently deliver credible news for science enthusiasts all across the globe. Their topics are mainly on the connection between Earth and space. The name was inspired by Greek goddess, Eos.

SciDev gives new science news, analysis from specialized scientists, and informative content covering on science and technology. It discusses the importance of global development through the means of science.

It delivers in-depth details on agriculture, environment, and health. This is a non-profit organization, dedicated to sharing reliable content to its readers. 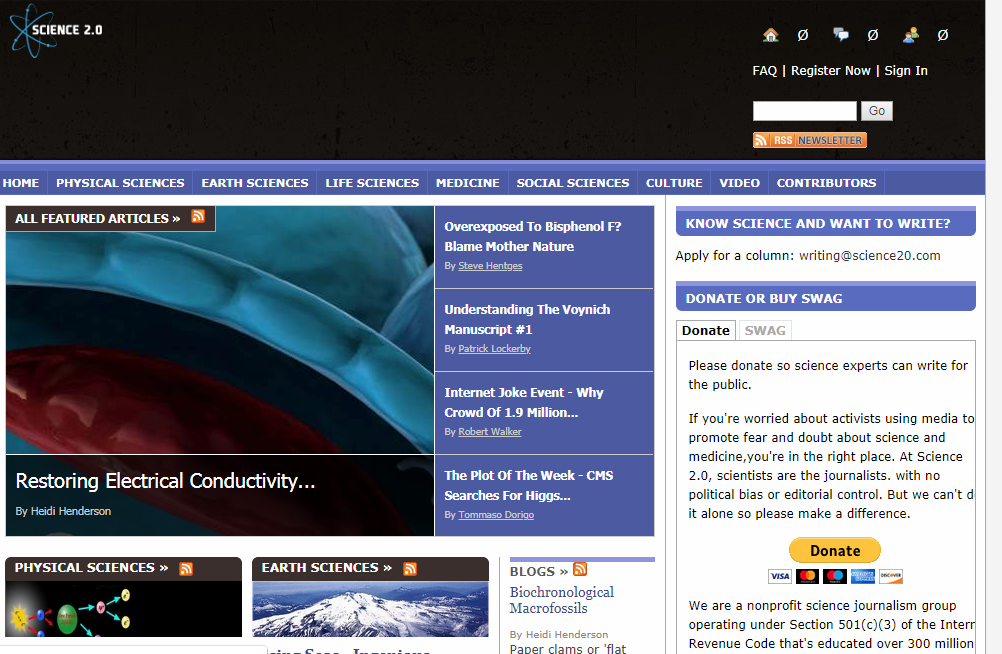 Science 2.0 holds the globe’s most credible scientists, and the world’s smartest readers. It focuses on the subject of communication and collaboration that includes everyone for the next two-thousand years.

Mosaic Science feeds you quality content of the stories of science and life. They update their website on a weekly basis, sharing ideas, trends, and the people involved. Showcasing the impact of medicine and its effects on community health.

Hakai Magazine discovers science, society, and environmental impact. It tells fascinating narratives that give you an in-depth look at the coastal life and occurrences.

Its focus is on the connection between human societies and nature. Painting a picture through illustration, photos, and videos for the readers.

Symmetry Magazine discovers the complexity and wonders of particle physics along with its connections to different areas of life science. It covers interdisciplinary associations to policy and culture.